Giorgio Armani t-shirt that similar to the Garuda Symbol 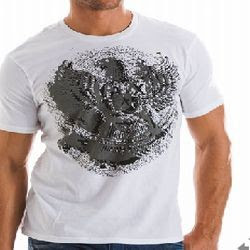 Who doesn't know an Italian fashion designer Giorgio Armani , and recently he made a t-shirt design with Garuda Pancasila Logo, or t-shirt with the logo of the garuda bird that's a symbol of Indonesia

Casual t-shirt that made by Giorgio Armani describes Garuda bird symbol similar to the symbol of the Republic of Indonesia as design. The T-shirt design similarity is seen from the position of the bird's head facing to the right. Symbols in the bird's chest is also described symbol of the precepts of Pancasila with 5 Star symbol in the center. But, this picture is disguised with strokes like collection of strokes in the sand.

When viewed closely on armaniexchange.com site, visible both legs of birds in the picture that was gripping the shirt board as a symbol of Garuda Pancasila with the slogan writing "Bhinneka Tunggal Ika" at the bottom.

However, the Armani t-shirt that similar to the Garuda bird is reaping a lot of criticism. This is a symbol of state abuse, Garuda bird is a symbol of the country should be respected. As a top desaigner Giorgio Armani should create an original work and does not trace, let alone that the trace is the symbol of the state. Coat of arms of Indonesia, Garuda bird, created by the founders of the struggle by the people of Indonesia and is permanent, not a model that can be changed by anyone. Said one commentator on the social networking twitter.

Anyway this is not a serious problem and there are commentators who support and even proud, because the symbol of Indonesia became the inspiration for a designer Giorgio Armani from the United States, And I think this is a good thing for Indonesian people.
Posted by Oke-oke at 1:22 PM
Labels: news

Please leave your comments or your promotion links, but don't add HTML links into the comment body, because I consider it as a spam, and will be delete..

Thank you for your visit..